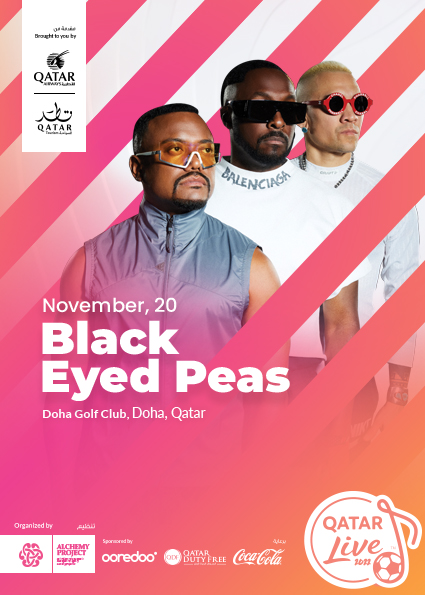 With every move, Black Eyed Peas dictate the rhythm of culture. Over the past 25 years, the Los Angeles trio—will.i.am, apl.de.ap, and Taboo—earned six GRAMMY® Awards and achieved sales of 35 million albums and 120 million singles across seminal releases such as Elephunk, The E.N.D., and more. One of the era’s biggest acts, they emerged as “the second best-selling artist/group of all-time for downloaded racks,” (Nielsen) and landed on Billboard’s “Hot 100 Artists of the Decade.” In 2011, they dazzled the world with a landmark performance at the Super Bowl XLV Halftime Show.

Their eighth studio album, TRANSLATION, achieved staggering international success after its release in 2020. Featuring major collaborations with artists such as J Balvin, Ozuna, Maluma, Shakira, Nicky Jam, and Tyga, the long-player garnered eight nominations at the Billboard Latin Music Awards, including ‘Crossover Artist of the Year” and “Hot Latin Song of the Year” for “RITMO” and a nomination at the 2021 Latin American Music Awards for ‘“Favourite Artists - Crossover”. The album resulted in a series of chart-topping singles, including the massively successful “RITMO (Bad Boys For Life)” [feat. J Balvin] and “MAMACITA” [feat. Ozuna and J.Rey Soul], both of which achieved #1 status on three Billboard Charts each, numerous award nominations, and gold, platinum, and diamond certifications globally. The knockout album single from December 2020, “GIRL LIKE ME” [feat. Shakira] continued this streak, achieving success on Latin and Top 40 radio, sparking a viral TikTok challenge in late 2020, and scooping “Best Latin” award at the MTV VMAs. The success of TRANSLATION continues to demonstrate Black Eyed Peas’ ability to reinvent themselves along with the ceaseless changing of the times

Brought to you by Qatar Airways and Qatar Tourism.