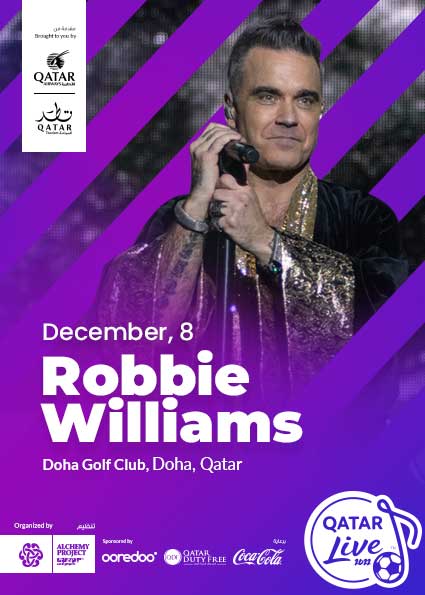 World Stage provides experience like no other – Superstars performing with Doha’s skyline as the backdrop, bringing together diversity of nations and languages on equal footing – all world united to spend 6 unbelievable nights full of energy and music in amazing Qatar.

The September 2022 release of the album XXV marks the fact – remarkable, improbable, indisputable – that it is now over twenty-five years since Robbie Williams tumbled out of the boy band Take That into a solo career that no one, not even him, could yet quite imagine. What has happened since then…well, part of the story can be told through the swagger of sales and statistics: over 85 million albums sold around the world; thirteen UK number one albums (the most for any solo artist, equalled only by Elvis Presley); fourteen number one singles; the most concert tickets sold in a day (1.6 million on November 19, 2005); the record-breaking three nights at Knebworth to 375,000 people in 2003; the parallel grand successes of his swing albums and of a reconvened Take That (upon release in 2010, the Progress album became the fastest selling album of the twenty-first century, and the subsequent tour was the biggest-selling British tour ever); an unprecedented and unmatched 18 Brit awards; the Christmas album, the X-Factor judging, the Royal Shakespeare Company musical The Boy In The Dress, Soccer Aid, numerous collaborations in music, art, radio, books, fashion, TV and film, and on and on and on.

But that’s only a small part of the whole wild journey, one on which XXV offers a fresh and illuminating perspective. Here are songs from across these twenty-five years – the oldest, “Angels”, emerging from only his second writing session with Guy Chambers at Chambers’ North London flat; the newest, “Lost”, emerging unexpectedly out of the ether one evening in Wiltshire last November. Aside from the most recent of them, these are songs that are now being revisited. Or, as Robbie might more precisely phrase it, “re-worked, re-imagined, and re-loved.”

Brought to you by Qatar Airways and Qatar Tourism.